Across the USA, two more citizens

Ellen Shipley in Santa Clarita, California USA sends this block and words:
Pigeons are ever-present denizens of a city, and what is more ubiquitous than a pigeon on a balcony?  Something has caught her attention however, and she'll soon be winging away.

When we lived in an apartment we put a feeder on our balcony to attract the neighborhood finches.  But word spread among the feathery folk and soon we had party crashers.  The jays were bullies and threw seed all over the balcony.  But the pigeons were the worst.  They ate so much seed they waddled.  Sadly we had to stop feeding the finches, who had long ago been chased away.  It's a bird eat seed world out there. 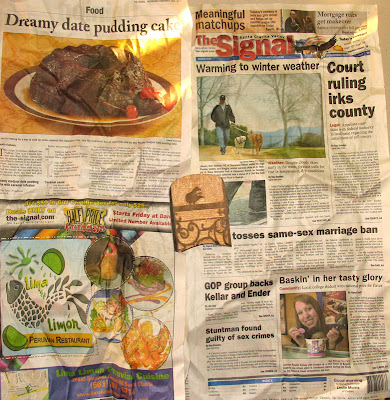 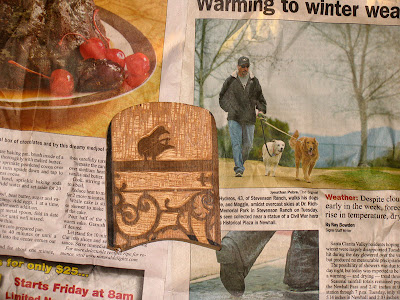 What cool images on the paper! Thank you.
Meanwhile across the country, Eric Hoffman from Warwick, Rhode Island USA sends his contribution:
I thought long and hard about this incredible project, The City of The World, and decided that my contribution would reference one of my favorite places to visit every time I visit a new city: The Used Record Store. Music like so many other things is quickly becoming ALL digital, to be downloaded and played in an instant from a computer. While I love the convenience of this new technology, my heart will always be in an actual record store. The smell of the old jackets, the history of how they ended up there, and the big beautiful artwork! I have always thought actual records sound so warm and beautiful on a turntable. The record store is a dying breed with more closing year by year.

My image for the City is one of excitement! The surprise and absolute amazement of finding an nice clean copy of an old John Coltrane album in a record bin! Pure magic, pure bliss! I primarily work in relief engraving, and a large body of my work features various 1950's Blue Note jazz musicians in their prime creating some of the most phenomenal sounds ever recorded! Every city needs music. Every city needs Jazz! That's my idea for The City of The World!!!!

My engravings can be found on my website - www.EHoffmanPrints.com 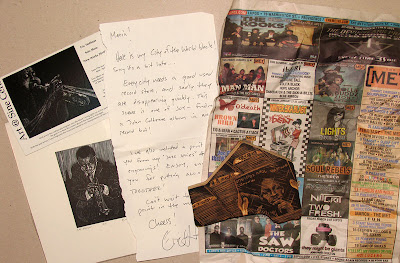 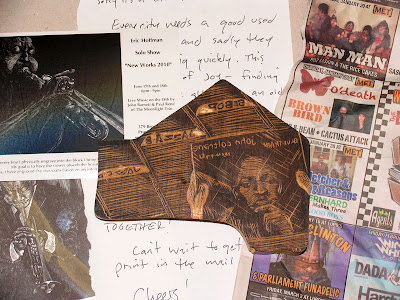 Awesome image! Thanks for the post card and goodies.
I have ten more contributions to post, photos already taken so if you have not yet seen your block, just sit tight!
Posted by Maria Arango Diener at March 15, 2012