Here it is drying away in my studio. My print for the Geographical Divides print exchange among Nevada printmakers is done! 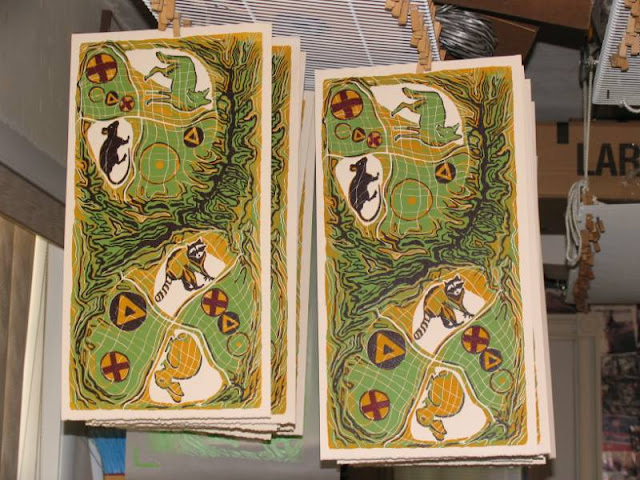 And this is where YOU, the viewer comes in! I am totally blanked out on a title. Here is the background of the project in a nutshell (or go to http://geographicaldivides.blogspot.com/ ):
Nevada printmaker and prof Anne Hoff, along with the tireless Candace Nichol decided to organize a print exchange between Northern and Southern Nevada printmakers. Not content with a standard exchange of prints, ha, the project dictates that a N printmaker starts a block, sends to a S printmaker who works on it. Then the original N pmker modifies the image again, prints and sends to coordinator. Some artists worked together on their project, but some of us were, er...geographically divided.
So my partner Lynne and I worked without meeting and decided on the theme "rural meets urban", something we both live and watch. I sent Lynne four pieces of my block in the true spirit of a puzzle block; she carved them, I received them back and proceeded to make them fit into a pictorial "whole".
The result is below, I wanted to do something with topo map "feel" following the overall theme; thinking of an image is hard enough, but when faced with someone else's interpretation, the degree of difficulty is raised substantially. My M.O. is usually to make a unified "narrative" regardless of how many different pieces I'm faced with. Since Lynne pretty much took care of the "rural" bit, I proceeded to fit her critters with some urban grids and symbols, splashed some color here and there somewhere between topo and traffic light, and came up with a four state reduction.
Incidentally, for those of you who don't know, that is roughly (very roughly) the alignment of Las Vegas (South) and Reno (North) within the mountainous great state of Nevada.
Now that you know all about it, I need a danged title! "Untitled" just doesn't do anything for me...would you help?! Either comment or send me an email to 1000woodcuts AT gmail DOT com
Da print: 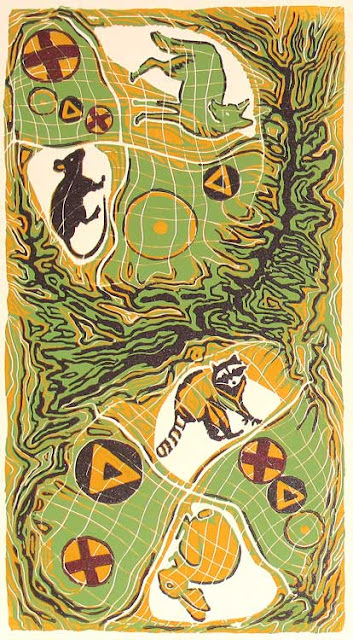