From the heart of the Southwest USA, citizen from Phoenix Arizona

If you want to be warm in the winter, there's nothing like the winters in the Southwest USA. In the summer, we put up with unreal temperatures well over 110 for endless days.
But the winters are absolutely a dream for outdoor enthusiasts.

In any case, here's a well crafted contribution from Joan Thompson, in Phoenix, Arizona USA, pretty much the center of the arts in the Southwest USA. 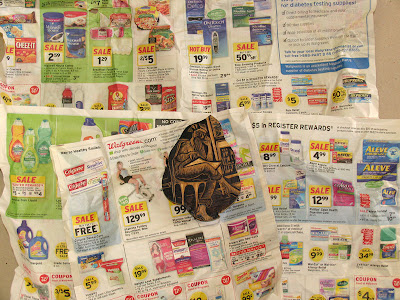 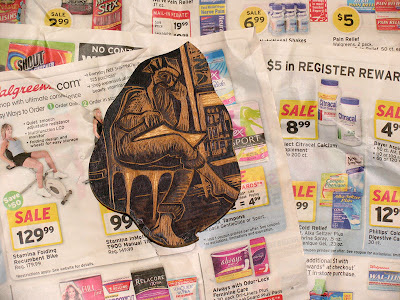 From my own home state, a bit to the North

When I first offered up the crazy project to the world, I was delighted to receive sign-ups from several printmakers in my very own state, Nevada. I just love this rugged piece of the world, mountains, desert...

Here are two Nevada residents who sent their blocks together so together they stay!
Carol Neel and Penny Pemberton from Reno, Nevada USA

And thanks for the nice note! 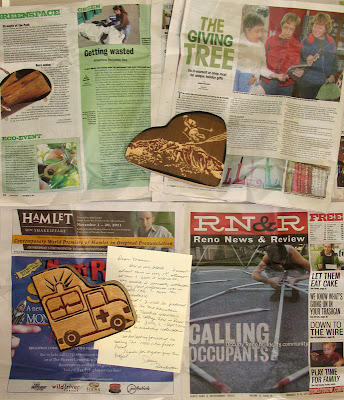 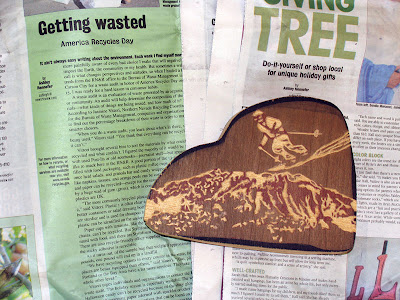 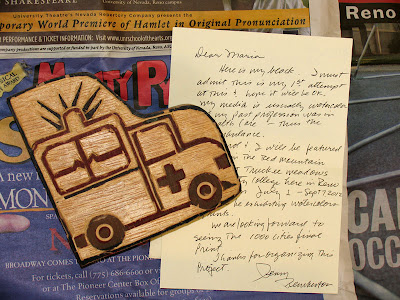 Some important links:
PROJECT MAIN PAGE
http://1000woodcuts.com/projects/cityoftheworld/index.html
THE BLOG! Where everything happens:
http://puzzleprints.blogspot.com/
The place to send information about your city block:
http://1000woodcuts.com/forms/cityblockinfo.htm
Thank you for playing!
Keep them coming home
Posted by Maria Arango Diener at December 07, 2011 No comments:

For nature lovers, two refreshing outdoor nooks within our City

Gillyin Gatto always delights with her view of the world from the "bobcat path". From Machias, Maine USA, her breath of nature:

My block, situated at the very top, seemed like an ideal place for a SOLAR panel. Hopefully our CITY OF THE WORLD will be using the free power of the sun for all its electrical needs.I carved my "my cousin" Vinnie sitting up on the roof of my dome, where he likes to sun himself beside my solar array. Cats have always been aware of the sun's energy! I have had solar power since '94 and would urge everyone to give it a try. The idea is not for corporate giants to make millions off the sun-that is greed. The idea should be for MANY individuals to incorporate solar on their own homes.Instead of purchasing that next new car-why not go solar and never have another electric bill, never lose power in storms , be totally independent and off grid? it is a mater of priorities-do we want to change the world for the better or keep on polluting with fossil fuels ?

If i can do it in Maine , living halfway between the equator and the north pole , certainly those living in the 'sun belts' can do it too. GO SOLAR ! 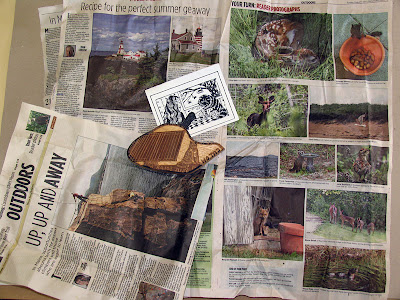 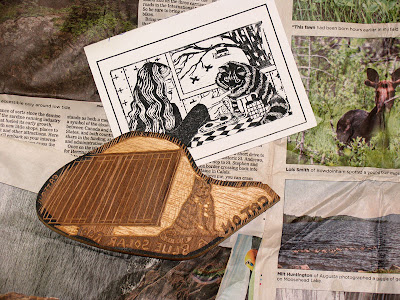 Sherrie York from Salida, Colorado USA sends her view of the city. I borrowed some of the images from Gillyin's paper as a background. Having driven through Salida often on my way across the country, I can just feel the beautiful surroundings of the Rocky Mountains and listen to the trickling roar of the river. 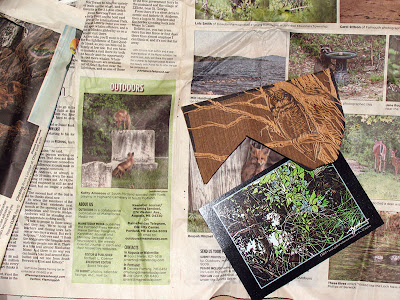 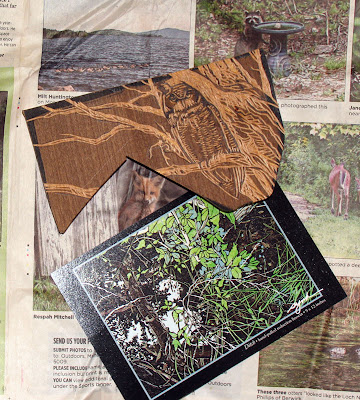 City within a city from the UK and another Brazilian citizen

My city of the world is a personal, composite print of my own city, Lincoln set in the rural county of Lincolnshire, England, UK. It was used by the Roman 9th Legion Hispania as their fortress in 65AD followed by the 2nd Legion Adiutrix in 71AD that eventually moved north. In the ninth century the Vikings invaded and settled down in the area until 1066AD when William conquered England. To establish his power he built a castle to keep us under control and ordered the building of a cathedral.
So what’s Lincoln’s contribution today as a city of the world in such a rural and isolated area?

His great cathedral still stands at the side of the castle and dominates the city skyline.

Architectural experts now rank it as one of the finest in Europe.

I came to Lincoln in 1964 and have never had any great desire to leave it. 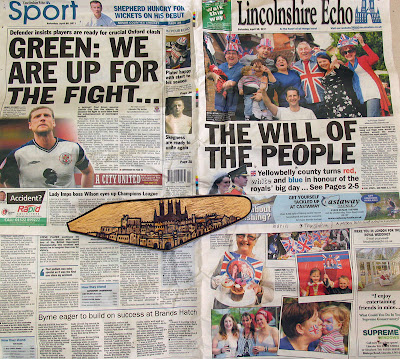 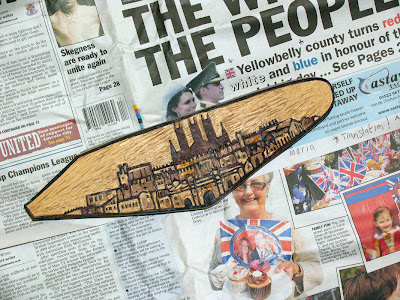 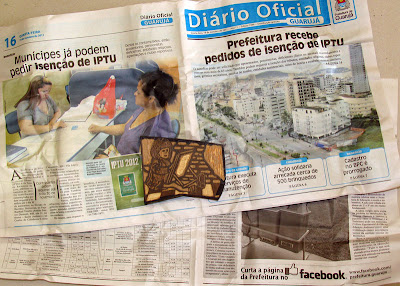 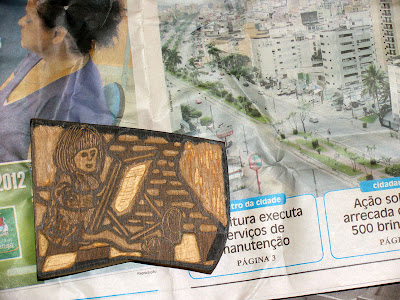 Citizens from the North in Alaska and Canada, brrrrr...

A great contribution from Julianna Humphreys - Juneau Alaska USA
Living on the edge of the big, wet, wild Tongass National Forest has its benefits! 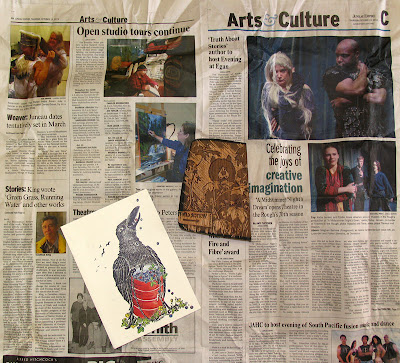 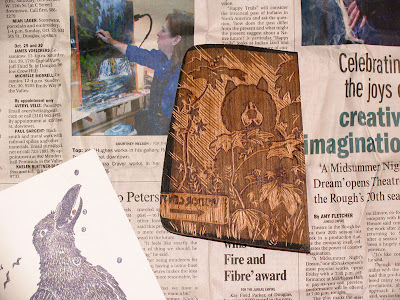 I don't know if I like the block or the card better!
And here is the contribution by Rozemarijn Oudejans - Ottawa Ontario CANADA, who says this about her very COOL block! (can you tell I'm a bike rider?):
Cargo bikes. The solution to traffic jams, parking problems, air polution and lapsing gym memberships. Bring your kids to school, go to work, get your groceries and your exercise, all in 1 bike ride. Save the city AND the planet, 3 wheels at a time! 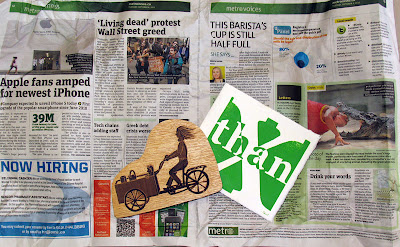 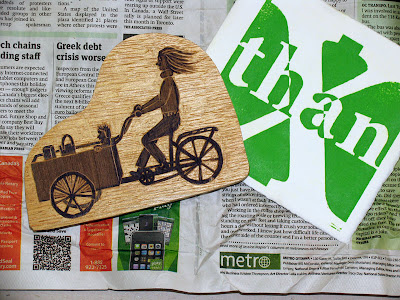 More posts in the next few days and the blocks keep coming!
Posted by Maria Arango Diener at December 04, 2011 No comments: 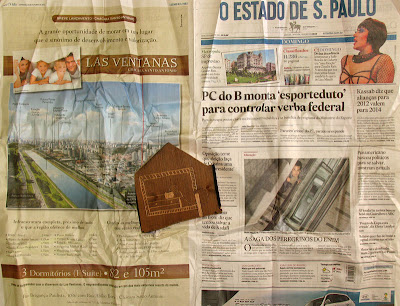 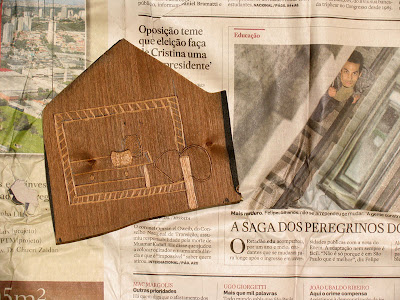 The two blocks came together so I'm posting them together. The newspapers were a joy to "read", even though my Portuguese is not really good at all. But, knowing Spanish, I could almost understand the gist of what was being written. 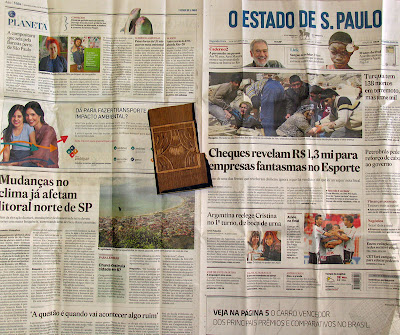 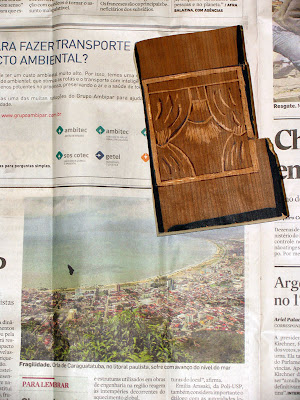 Thank you for the beautiful pictures!
Posted by Maria Arango Diener at December 03, 2011 1 comment:

Mejico via Washington and Queensland Australia

World traveler Marilynn Smith spends time equally in Mexico and Nahcotta, Washington USA, she takes time out from the road to send a clever contribution:
I don't live in the "city" any more, love being a country girl. My brain just did not want to deliver an image for "City of the World". A few days ago we had the first storm of the season, here on the Washington coast, it blew hard, it rained like crazy and I put on my rain suit to take my dogs for their morning walk. Day dreaming as I walked I thought "when I was in the city I would be carrying an umbrella". Inspiration, I had my image for "City of the World". It is an upside down umbrella on a porch with a cloud and rain drops. I call it a Blustery Day in the Pacific Northwest. 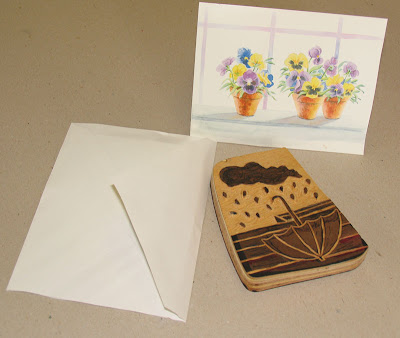 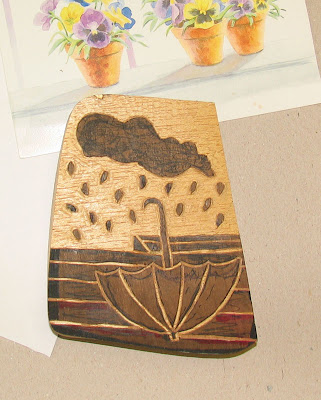 And Diane Patmore from Queensland, AUSTRALIA, sends us a party!
Living just minutes from the sea I thought an evening party on the beach, with fairy lights in the trees, might be fun and a good way for us "citizens of the world" to get to know each other.
So...here is my block "Beach Party." 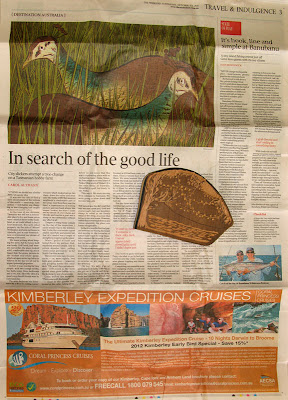 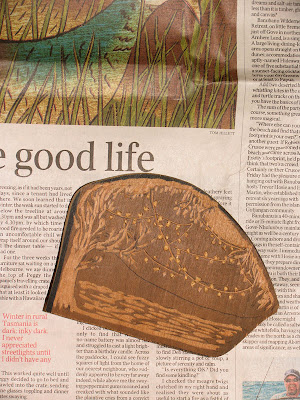 In case you missed it, the recent email sent to all the citizens with all the information at your fingertips:
Remember the initial deadline for this project is fast approaching!
There are just over half of the blocks already back here with their neighbors, some are traveling to me as we speak.
Please don't "quit" if you can't mail by the end of the year though. Try very hard to get them to me but know also that we will await all the happy blocks, otherwise we'll have a puzzle with holes and nobody wants that.
I have 15 blocks arrived in the past two weeks already photographed and put away.
Look for the blog updates to see the marvelous contributions in the next few days.
Here are the names of the latest arrivals:
Fernanda Maria de Castro Solla - Santos Sao Paulo BRAZIL
Maria do Rosario de Castro Solla - Santos Sao Paulo BRAZIL
Ruth Dee Egnater - Okemos Michigan USA
Harry French - Lincoln Lincolnshire UNITED KINGDOM
Gillyin Gatto - Machias Maine USA
Julianna Humphreys - Juneau Alaska USA
Nanci Guedes Nastari Saia - Guaruja Sao Paulo BRAZIL
Carol Neel - Reno Nevada USA
Rozemarijn Oudejans - Ottawa Ontario CANADA
Diane Patmore - Eimeo Mackay Queensland AUSTRALIA
Penny Pemberton - Reno Nevada USA
Annamie Pretorius -   Swords County Dublin IRELAND
Marilynn Smith -Nahcotta Washington USA
Joan Thompson - Phoenix Arizona USA
Sherrie York - Salida Colorado USA
Some important links:
PROJECT MAIN PAGE
http://1000woodcuts.com/projects/cityoftheworld/index.html
THE BLOG! Where everything happens:
http://puzzleprints.blogspot.com/
The place to send information about your city block:
http://1000woodcuts.com/forms/cityblockinfo.htm
Thank you for playing!
Keep them coming home,
Your fearless City Mayor Maria
******************************************************
Don't forget!
Deadline: December 31st 2011
Send Block Details/Information for the Colophon: http://1000woodcuts.com/forms/cityblockinfo.htm
******************************************************
Posted by Maria Arango Diener at December 01, 2011 No comments:

They are coming fast and furious! From Michigan and Ireland

Ruth Egnater from Okemos, Michigan USA, says this about her city block:

Didn't even do the image I had worked out all along.  Just changed it today and started and finished the block.  I have lived in Detroit and Chicago and travel as much as possible to other cities and love the well done graffiti and murals found on buildings,trains, and murals making our cities even more special.  One of my daughters lives in Baltimore,  took photos of one artists numerous love messages with a double loop on the O and a heart at the end .  She turned the images into post cards and I chose one that looks like an alley with a freight elevator with the love message spray painted on the door and of course the heart attached to the end.. 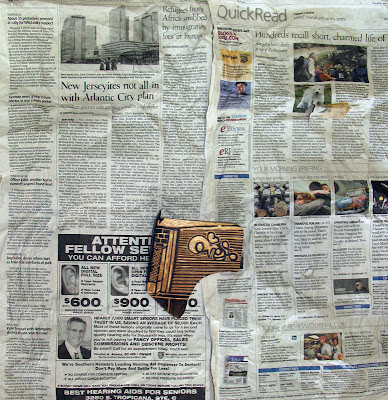 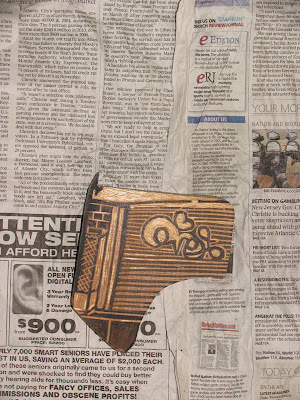 Annamie Pretorious sent her block across the pond from Swords, Dublin IRELAND.
I guess I confess enjoying most the newspapers from around the world; funny to see the same advertisements in some of them and stories near and dear to the sender and the entire world. This project is turning out to be quite a global conversation! 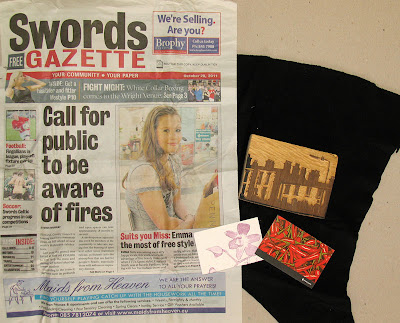 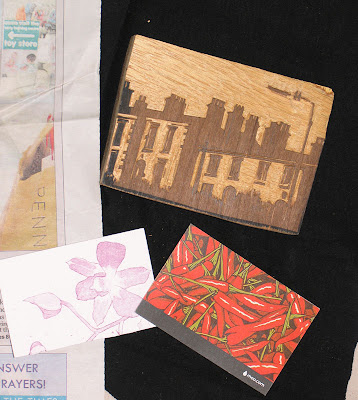