Another block printed! Dance, anyone?


In my quest to get five prints and blocks ready for the upcoming exhibit at the OXS Gallery, Nevada Arts Council, I am now on image number three with two more to go.  This print was a bit more difficult than the last two and so it decided it would take up two days of my precious time. So be it, after all, I am the one who chose the finicky paper.

Revisiting an older image is always interesting. I designed this particular image, to the tunes of Flamenco that I often listen to while working. In those days, I would join two pieces of cherrywood together when I needed a larger board than plank cherry, which has a maximum width of about 12-14 inches.
Nearly all the blocks that I joined have aged and unfortunately many of them print with a seam down the middle. So first I needed to fix that problem, with masking tape along the back to raise the seam and force it to take ink. After a few prints, the seam was unnoticeable.
Another problem, the block was not carved very deeply so, rather than stop at every inking and wipe the raised areas, I instead took an hour or more to re-carve the low areas so they would not pick up ink. So much for a quick edition...

Then there is the paper! In them days I would pick up papers from all over the world, often at a bargain price from some little papermaking operation tucked in some tiny town. This particular batch of Banana Bark paper from Thailand (I think) was nicely made, the sheets are huge and have some interesting inclusions of bark and tree fiber. 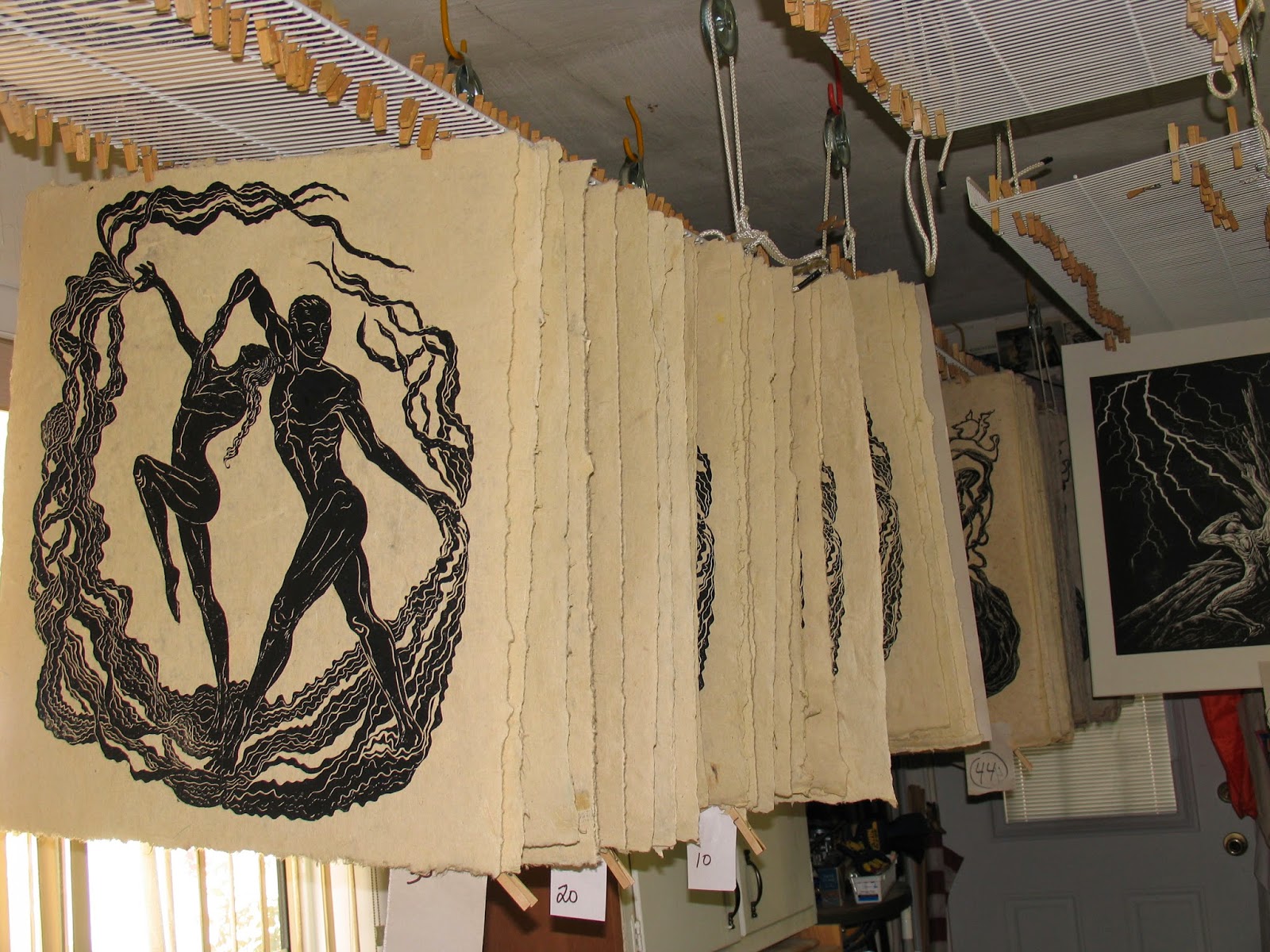 These inclusions cause problems, however, and I had forgotten how finicky this paper prints. It is cotton based and slightly stiff and tends to "shed" inclusions and cotton fibers all over the block when submitted to pressure. Sigh. This means the printmaker has to stop and clean off the entire block every 4-5 prints, making for a very long, very dirty day at the press.
Wouldn't trade it for anything else, though, the paper is delicious! The texture and inclusions make every print totally unique and the variations within the paper sheet is perfectly suited to the wild flamenco dance. Ole!

Persistence, a strong back and a high tolerance for dirty fingernails eventually wins the day and I am now finished with this block and on to the next two.

Posted by Maria Arango Diener at August 26, 2014 No comments:

This has been a very busy year and I am grateful for all the invites and acceptances from galleries and venues in Nevada. I have previously exhibited quite a bit in various places across the US and across the globe, but this year I am proudly being shown in Nevada!
Aside from feeling good about it, I am also working like a madwoman! Getting artwork ready for an exhibit takes much excitement, preparation, time and money.

So later this year, November 10, 2014 – January 23, 2015, the Nevada Arts Council has invited me to exhibit along with a fellow artist in the OXS Gallery space in Reno, Nevada. Details will come later as to location and such but for now, I am happily working to get the chosen works prepared.

I will be showing 5 woodcuts along with their blocks. Now, as a background, in the past I have only printed a few of each edition as I finished an image. Two reasons for this, one is that I usually have several "irons on the fire" and simply can't take the time to spend three days to a week printing 100 or more prints. Second reason is that I very rarely am I in a position to be able to afford the required paper. I guess a third reason would be that if I had printed all the prints in every edition of all my images so far I would need a few more flat files!

A fresh batch of paper arrived yesterday and I have the third block all ready to go. My press-cranking arm is getting a workout!

Posted by Maria Arango Diener at August 22, 2014 No comments: