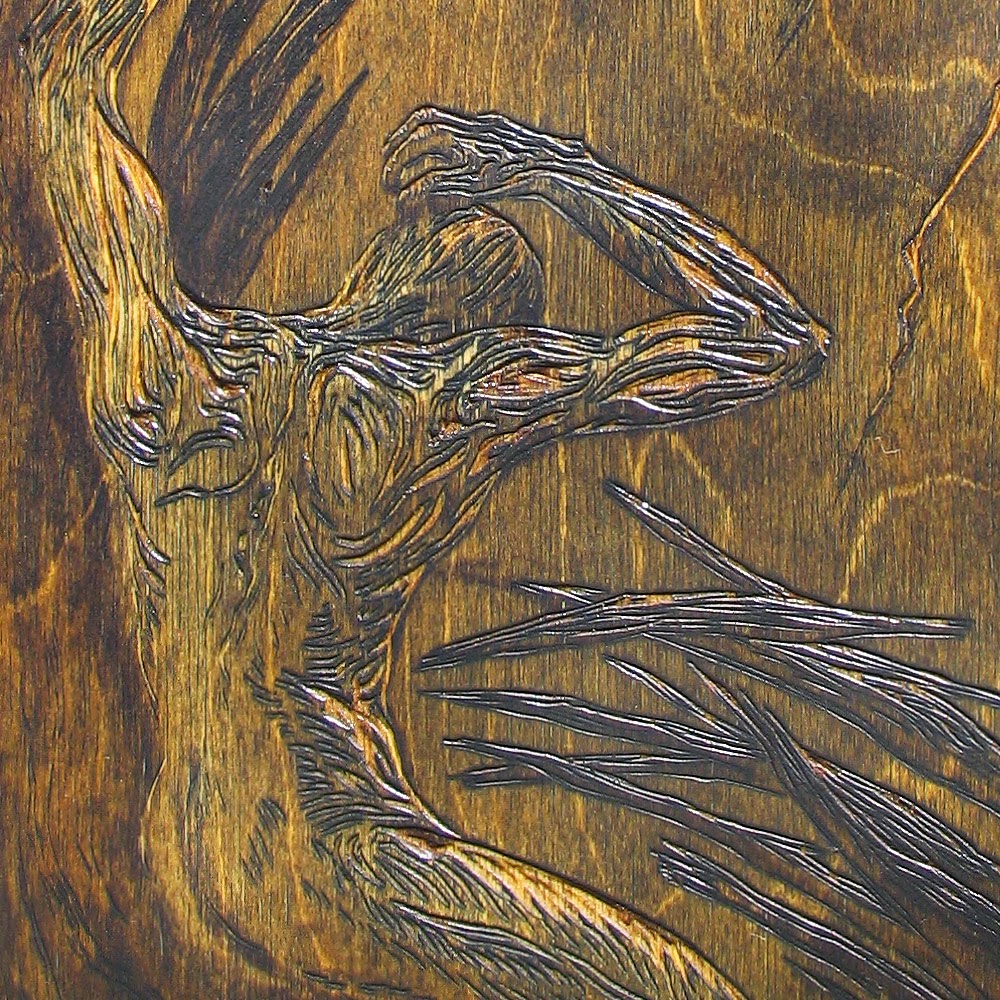 Struck was carved "white line" style, a technique in which the carving is the positive image and the background is inked in black. This is widely used for night scenes where the carved area is "lit". Sort of a reverse reverse woodcut print?

In any case, the lines on this block were carved very fine to show the delicacy of the lightning, and I even used rough sandpaper on the block to make the black sky a bit less black. All the different carving techniques made for a block that was not so exhibit-ready.

First step was to strip the old layers of ink with a citrus-based paint stripper. Works quite well and leaves the wood only slightly stained. The stripper is applied, left on for about 30 minutes or longer and then scrapped off with a plastic putty knife so as not to damage the wood. Some old fashioned soap and water follows and the result is a fairly clean block. Most importantly, the carved lines on the figure came up clean.

Still, I was not satisfied with the appearance of the block so I decided to experiment with stains. First I stained the whole block lightly with a walnut stain, resulting in some of the lines accepting stain partially. This gave the lines more depth and still the deeper areas remained clean. I rubbed off some areas more than others until I was happy with the result. I stain with sponge brushes and use old socks for rubbing the stain off.

With the background solved, the figure didn't stand out enough so I took some rough sandpaper to it and brought the white birch back to life. Now with the figure and background contrasting nicely, I thought the tree element needed to be separated from the background so I stained it with a bit of red mahogany, wiping away until the tinge was just different from the background. The front "broken" tree needed to be brought toward the viewer so I gave it the same stain as the background but left it a bit darker.
Lastly, a nice coat of satin polyurethane over the entire block to eliminate the shine and protect the stain and the bare birch.
Posted by Maria Arango Diener at September 25, 2014 No comments:

Original woodblocks with a makeover

I have been selling my original woodblocks at art festivals for years and, in getting them ready for "market", I have found that each demands its own particular makeover.
Some are ready to sell, they stay clean during printing and all that is required is a few cleanups here and there. Usually cherry and maple blocks are very well behaved. Lines stay clear, ink goes only where it is rolled and the backgrounds remain beautifully carved, clean and showing all the scars of the cutting process. Few...and far between!

I usually simply let the last layer of ink dry after printing the last print of the edition. Then I carve my signature or chop and often add a symbol with a metaphor to the image. Lastly I cover with a protective coating, sometimes polyurethane, sometimes a polycrylic, sprayed or brushed but just enough so that the carving scars show. The intent with the signature and the coating is to cancel the block so that fine lines fill in and no more prints could possibly be made from the block, resulting in a one-of-a-kind work.

Wouldn't you know it, these two baltic birch blocks were definitely NOT well behaved. By the time the edition was finished the lines were soft, the backgrounds were soiled and some of the plywood had actually started to fall apart.
When blocks misbehave I still have to make them presentable enough to exhibit or sell. The last resort is to stain or paint the entire block with an opaque coating, let dry and then roll up with ink as for printing. These have the "cleaner" look but the downside is that the natural wood is completely covered with something opaque, usually acrylic paint or water-based ink. I try to match the original color of the wood but something about painting wood seems almost sacrilegious.

In any case, the blocks with a detail or two for Maze and Light Seekers. The Maze block was cut originally with a scroll saw to make printing easier so I wouldn't have to worry about inking the background between the delicate areas.
More to come next post!

Posted by Maria Arango Diener at September 22, 2014 No comments:

It's been a very busy three weeks but I am now finished printing the remaining editions of the five OXS Exhibit prints at the Nevada Arts Council in Reno, Nevada.
I am half planning a little crowd funding project to help frame the exhibit and get myself up there but that's to come in a couple of weeks. Tiny originals, anyone?

Printing older works brings mixed feelings. On the one hand I am SO done with those images...but on the other I can't help myself and usually tweak the image just a bit. Obviously with woodcuts I can't "add" anything but many times I open up an area, change the outline, clear up some confusion and so on. I did that this time so all the prints have been somewhat redefined to meet my current artistic mood. Subtle changes!

The work is now done. Some blocks didn't hold up to my initial edition projection, which I find happens often. Birch, birch, birch...breaks up, softens up, muddies up... Cherry, on the other hand, does just beautifully under my press or hand. 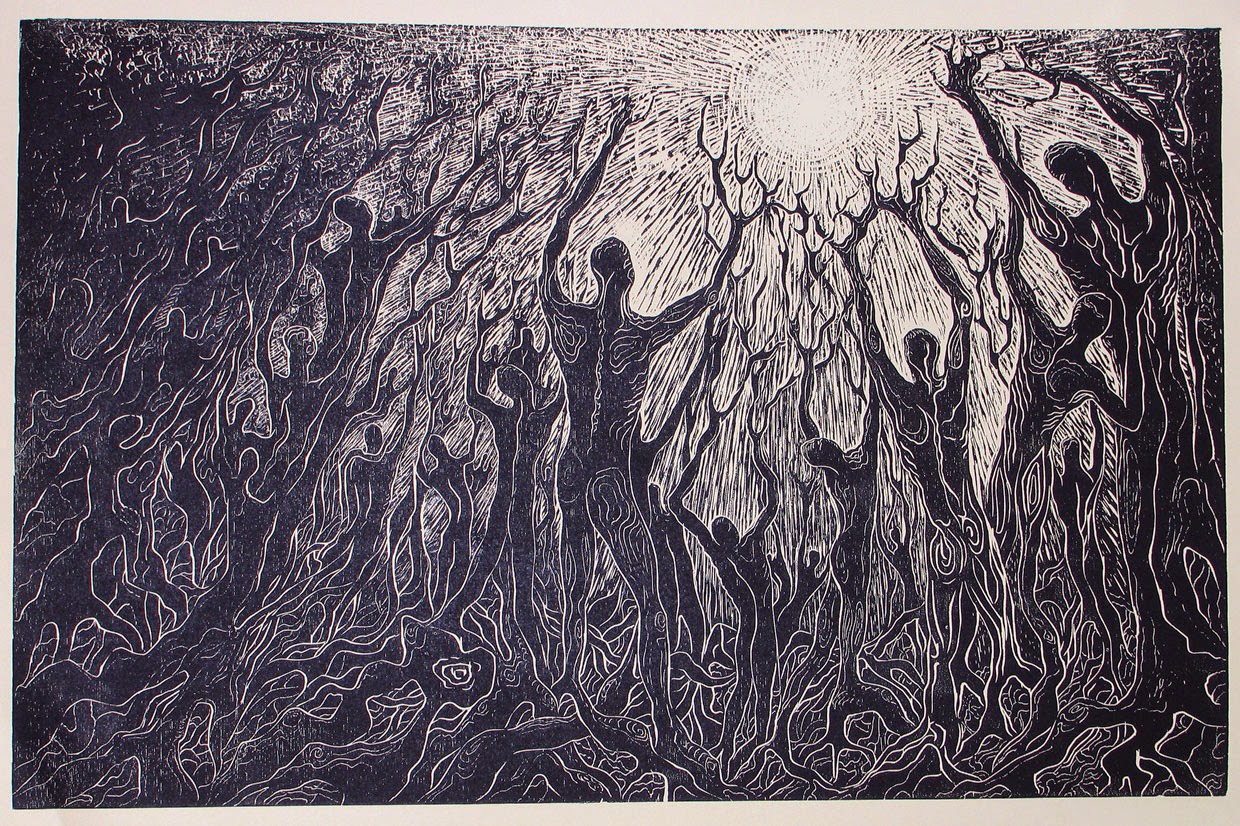 An image inspired by a forest and all the trees and plants reaching for the sun. Someone at a festival called it "very spiritual", others find it enlightening, yet others dark.  I picked a birch block with a strange knot in it and made it the sun; the figures just seemed to reach for it. 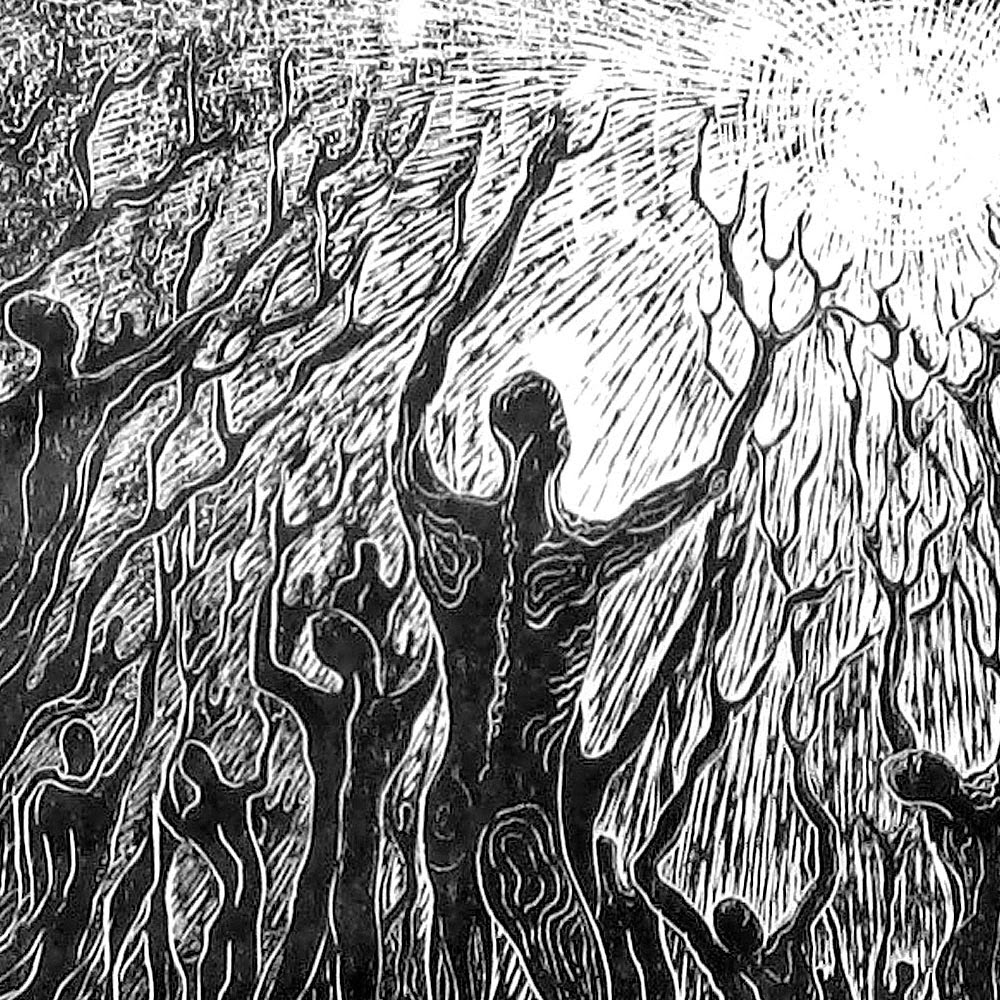 The Blocks about to get prepped

Just a sneak peek at some of the blocks getting a makeover. I will be posting again on the process to get each block ready for exhibition, but for now, here are some pictures of the precious things.

Posted by Maria Arango Diener at September 09, 2014 No comments:

Only one more print to get ready for the upcoming exhibit at the OXS Gallery in Nevada!
These larger prints make me wonder what the heck was I thinking when I decided to go big. Miniatures! next life... But the "big ones" do tend to give me a sense of satisfaction and achievement. They take much energy and work to complete, especially when that other Maria decided to entertain large editions. Really? Anyhow, this particular image, Uprooted along with Struck happen to be two of my most heartfelt.

When art means something...

Last week I finished printing an image called Struck. In 1998 or thereabouts, my father suffered a stroke and subsequently  required help to get along life. After seeing him shrunken in a wheelchair in the corner of his apartment, we took him into our home. His brother, then a contractor, built an addition to our house so that he could remain somewhat independent yet allow me to care for him.

He was lightly struck, as far as strokes go, retaining most of his abilities to walk with a limp and eventually speak normally. His right hand was near useless. Reading that stroke victims after 70 have a dismal survival rate over two years, I decided to take over his care...as much as he would let me.

During the next eleven years I ripped the wheelchair out of his life and exchanged it for a three-wheeled bicycle, later a scooter when the bicycle became impossible to pedal. He was in every sense of the word, independent (read: stubborn). We fought, we yelled, we laughed and in the end I was happy I took on the task of helping him along until the end in 2009.


Uprooted is a homage to all those who can't, on any given vacation, revisit their childhood home. In 1974 we immigrated to the US from Spain, but previously my family with a not-quite two year-old Maria, was uprooted from Cuba. I don't remember Cuba at all, but I do remember Spain quite well with very good and happy memories of growing up with the initial help of Las Filipenses, the happiest collection of nuns.

A family of five, we left with two suitcases about of the size of today's carry-ons and that still reside in one of my closets. The most salient memory of the trip to the US was that of leaving Barcelona on a train to Madrid, from where we would eventually fly to America. That train left in the dark of night with friends surrounding my parents. I remember someone mentioning that I wasn't crying but the phrase was muffled and distant. Then the train left and I remember entering the darkness of a tunnel.

That tunnel has stayed with me, both as a refuge and as a reminder of past places and of hopeful futures. It isn't at all depressing,  but merely a place where I felt safe and guarded from distant pasts and unknown futures. Uprooted once more, ready to grow roots in a new place yet never forgetting the last.

When I hear people talk about immigrants today, a part of me thinks of that tunnel and I know that they probably have their own safe tunnels where their souls reside temporarily until they can lay root again.


Posted by Maria Arango Diener at September 03, 2014 No comments: