Valley of Fire II - States of the Print

Again I had some fun with this print. Also, an accomplishment: I made mold in Vegas! I didn't think it was possible, but there it was...tiny bits of round fungus right on some of my paper. For the record, the New Hosho paper did not mold at all, the proof paper got the most mold and the Stonehenge Cream somewhere in between. Oh, HOW I made the mold...too long inside the plastic, too hot in the studio, too lazy or dumb to put stack in fridge.
I can't really help mysef when printing I like to try different papers and see the paper "change" the final print. Stonehenge Cream is tough to print on (literally! hard stuff) but some very nice results and registers very well because it is thicker than the New Hosho.
Here are the blocks in sequence: 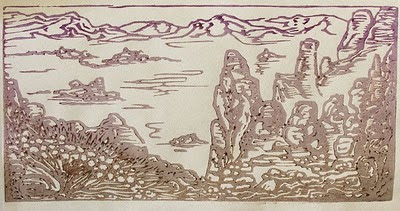 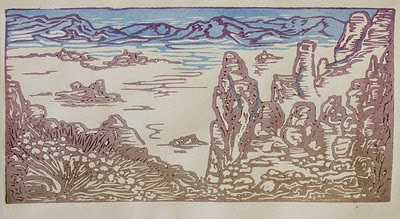 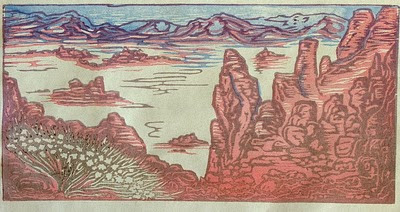 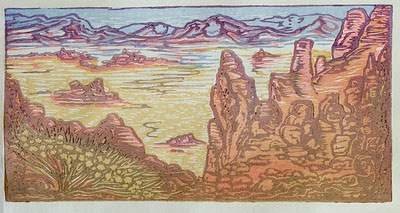 And the final image on New Hosho: 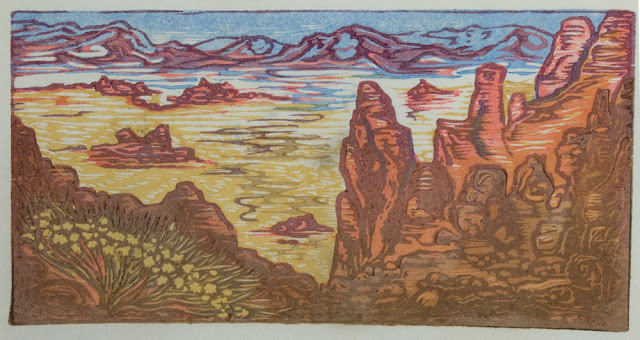 "Final" is debatable, still thinking on adding another color, perhaps a blotchy olive green in the closer desert to add texture. And maybe on the foreground mallow as well. We'll see...right now I have to get ready for my show, setup in two days, loading tomorrow. Oh, see previous post if you missed the announcement!
Posted by Maria Arango Diener at May 30, 2010 1 comment: 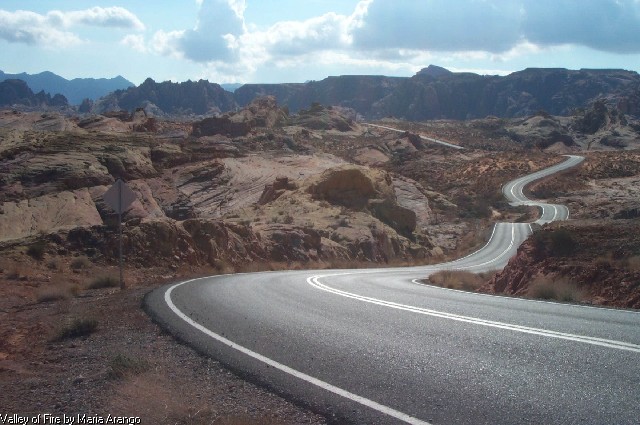 Well, in the meantime, here is the announcement, to be repeated soon:

And for those who miss the show, a shameless plug follows for my
Memorial Day Collector's Appreciation
http://1000woodcuts.com/
Posted by Maria Arango Diener at May 28, 2010 No comments:

Adjusting that floating kento, now that you ask!

Ah yes, a few of you asked how to adjust the floating kento.
With a "real" kento, little pieces of wood are inserted into the kento to adjust "out" and the kento is carved to adjust "in".
How to tell whether your kento needs to go "out" or "in" is something you have to figure out on your own. I think hard which way I need to adjust and when I finally decide, I do the exact opposite and I'm right about exactly half the time. I figure that's why God invented proof paper. But seriuosly, I have a much easier time adjusting the color image with respect to the key image since I started using this movable kento.
But back to the floating kento adjusting matter...

To adjust "out", that is, to move the block "pa ya" or "over there" or away from the kento, I simply insert little pieces of painter's tape into the kento. The tape is removable with no residue and can be added one layer (mil) at a time until the registration is as good as it's going to get--er, perfect, that is. 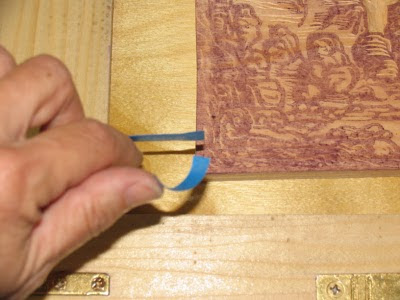 Them's the little pieces of tape, about the thickness of the kento-board; I stack them as thick as the registration is off...which it never is, of course, hardly...ever...
Next picture shows the little darlings stuck in place at the crucial corner and lower edge of the kento-board. This pushes the block and therefore the image AWAY from the kento. 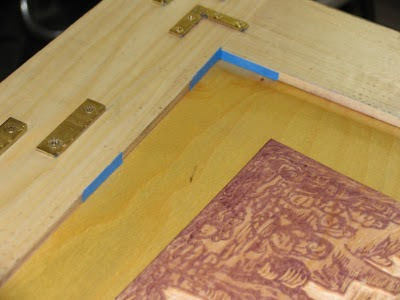 And the block flush against the adjusting tape. 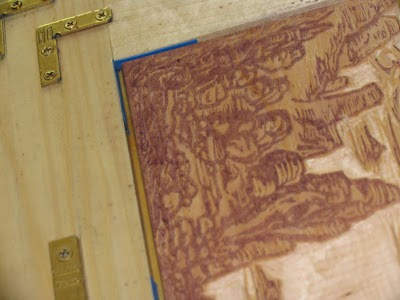 If the adjustment requires that the image or color block be moved TOWARD the kento, or "pa ca" or "over here" or "inwards", I just shave the block with a straight chisel, one millimeter at a time until I achieve registration. 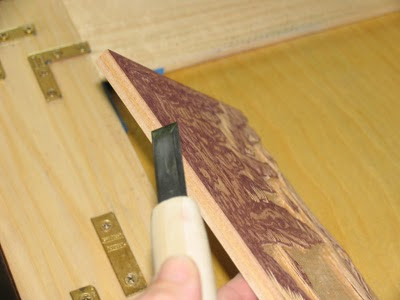 Although this seems like a permanent non-reversible fix, if I shave too much...well, there's always more tape!!!
Posted by Maria Arango Diener at May 13, 2010 No comments:

Progress on the Geographical Divides collaboration

I am working with another printmaker on a collaboration piece, actually two. She starts one and I add to it and then she prints, and I start one, she adds to it and then I print. Then a bunch of us exchange prints. Kind of cool. I have reported before that I'm doing a puzzle print and you can see the progress of all of us here:
http://geographicaldivides.blogspot.com/

Things are quietly moving along with our happy creation. My partner in printmaking and I chose to do something along the lines of the dichotomy between rural and urban, generally speaking.
Lynn lives on the outskirts of the city and enjoys rural views from her urban digs. Maria lives smack in the middle of the city (formerly the outskirts!) in an acre with plenty of "elbow room" between neighbors, neatly simulating a tiny rural environment.
Anyhow, Lynn is in possession of my puzzle blocks and I am about done carving my part on my own block, plus the four pieces. I might do a color background on the...er, background, but that is to be decided.

In the meantime, I received Lynn's block, neatly carved with a variety of interesting images and shapes. 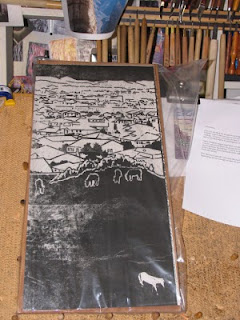 This is a proof of the block, with my "blank canvas" at the bottom. I really liked the roof shapes and the shape of the vegetation-divider in the middle of the image, so I decided to replicate them.

Since I don't often sketch except right on the block, I had to revise the way I work. I took this very picture into Photoshop and proceeded to doodle on the bottom with my trusty graphic tablet pen.
I wanted those very interesting shapes to tie in my design and Lynn's so I simply copied and pasted some of her shapes with some stretching and replicating and mirror imaging and all that is possible with PS.

I find that looking at images very small on the computer screen helps balance compositions and blacks and whites. Also help in color schemes.

Lynn's rooftops became my mountains, the little house in the middle of the desert was "stolen" from Lynn's housing complex, the horses shrunk to fit the scale, and the bushes flipped and distorted to fill in the foreground and balance the blacks. 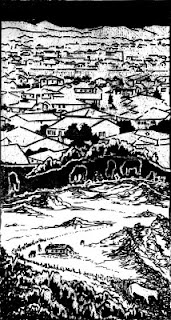 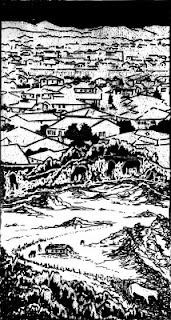 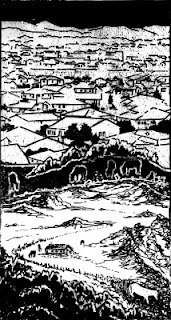 After a few days of looking at the thing, I came up with three very close versions of what I wanted to do. Since Lynn chose to depict the urban environment with a little "rurality" for contrast, I chose to do just the opposite. Here are my sketches, you can play "find the differences" if you like. We decided on No.3 and I'm carving today as soon as I get off this chair.
The carving begins!
Posted by Maria Arango Diener at May 11, 2010 1 comment:

I cover the back of my paper with a barrier paper to avoid damaging it while printing with my powerful muscles--er, my powerful baren. As you well know, efficiency is an obsession of mine and I struggled to find an "elegant" method to place the barrier paper on the back of the printing paper so that the effort was minimal, the paper didn't blow off between prints, and it was placed same-side-down every time to avoid staining the baren.

Here is one trick, I'm sure there are others. I use glassine, by the way, which I buy by the roll to interleave my finished prints. 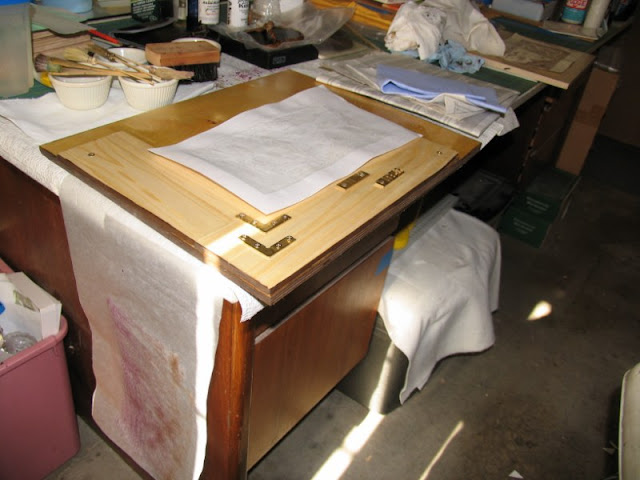 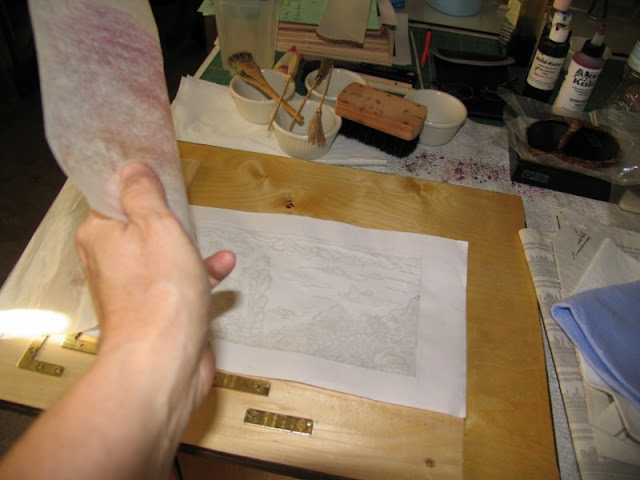 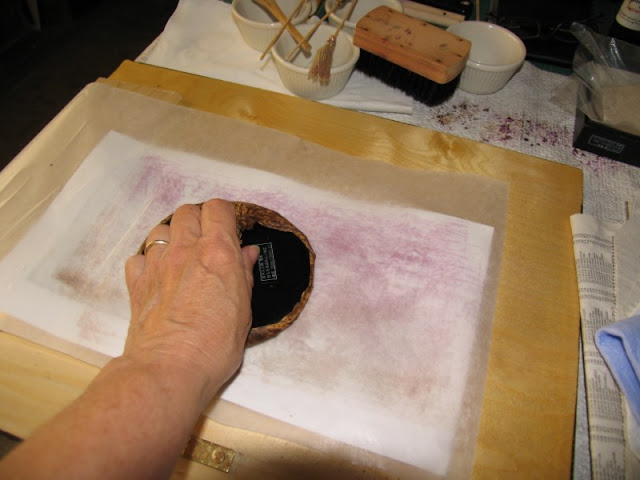 Rub a dub, I don't grab my baren like that when I'm printing "for real". Try to keep the barrier paper from wrinkling because the damp printing paper will pick up the wrinkles and mysterious lines will show up. 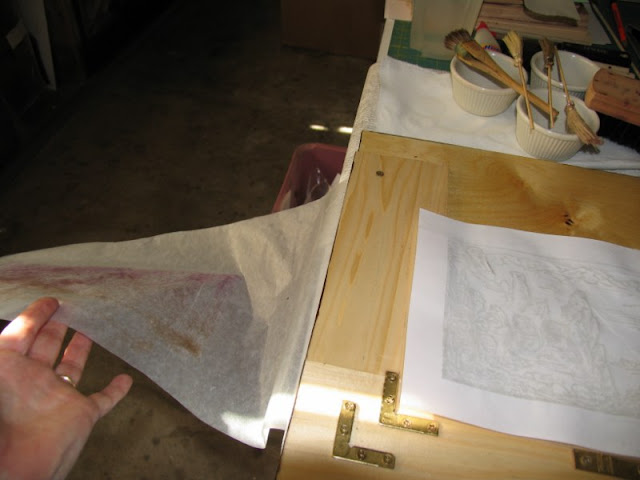 Voila! I let go and the paper is ready for the next print without taking up valuable "within-reach" space and without blowing off somewhere.
Posted by Maria Arango Diener at May 05, 2010 2 comments:

Back on track after a few weeding days. It's hot now and printing moku-hanga is just not nearly as fun as it was in the winter. Just a bit too stressful to try to keep everything the right dampness when humidity dips into the 4-8% range. Sigh...my kingdom for a HUGE humidifier.

Nevertheless, we plow on with plastic and spray bottle handy. Key block is now printed in a gradient from raw umber to violet; what the heck, time to get fancy even if lacking in skill. What's the saying? "Never mind that the horse is lame...load the wagon!!!" 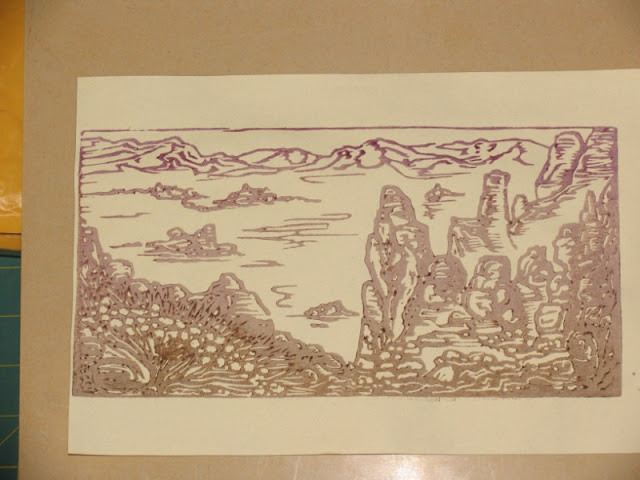 This proof is a bit messy on the bush, my fault for having clumsy paws today. But I was pleased with the gradation from rock to mountain. Tomorrow the first color or two if I feel energetic enough.
Posted by Maria Arango Diener at May 05, 2010 No comments: