Another contribution from Canada and the Pacific Northwest USA

There were several archetypal street inhabitants of the city, identified by Walter Benjamin (1892-1940), the great social critic:  the flaneur (the strolling idler), the gambler, the ragpicker and the sandwich man.

"Empathy with the commodity is fundamentally empathy with exchange value itself.  The flaneur is the virtuoso of this empathy.  He takes the concept of marketability itself for a stroll.  Just as his final ambit is the department store [shopping mall], his last incarnation is the sandwich man."  (Walter Benjamin, The Arcades Project) 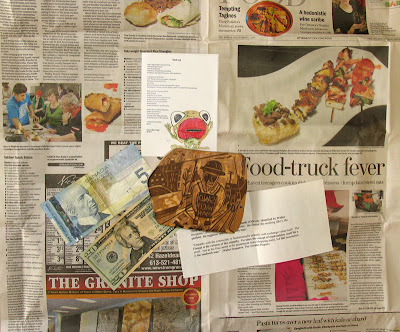 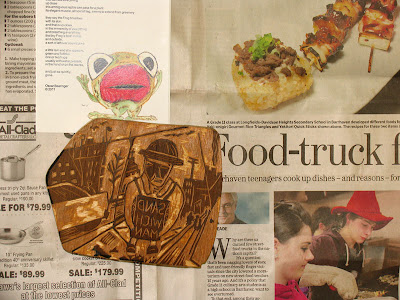 Misty Haskins (formerly Arnold, congrats!) from Sprignfield, Oregon USA has this to contribute:

Granite and Pine, Maine coast
I've lived in a few cities, but never far from the coast.  Although I've now settled down far from my home state, when I really think about home, about my place in the world, this image springs to mind - a snapshot in my heart of a foggy morning on Cadillac Mountain, which overlooks the nearby town of Bar Harbor and the Atlantic Ocean.  I would go there sometimes hoping to watch the sunrise.  More often than not, though, the view would be entirely obscured by a thick, velvety fog and I would instead find myself daydreaming among the resilient trees and stones, wrapped in vapor, until it generally became light... close to a lively community, but removed just enough for some much needed introspection.  Upon discovering my puzzle piece is on the periphery of our print, I was delighted to be able to incorporate this image.   To be a part of such a vibrant whole, while maintaining just a bit of quiet away from the bustling city below, somehow feels just right. 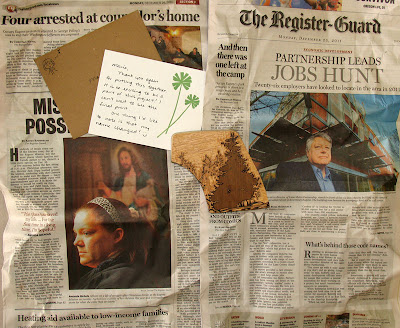 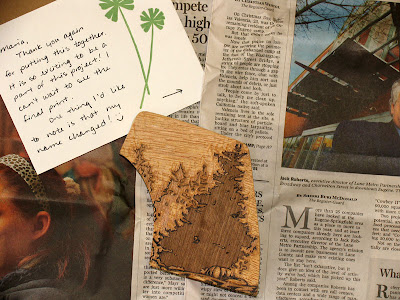 And with that I'm done with this batch of arrivals. I have a fresh catch all photographed and ready to go, my last group! I can't believe I've done this nearly 100 times but here we are on the last 15.
The colophon should be something to savor. I have not yet decided just exactly how to publish this 100+ page beast. My eco-sense tells me to assemble a .pdf file and let everyone download their own.
I am also planning to publish that very same .pdf into a nice book for others to purchase and savor.
As I have it visualized, every page is a participant with a close up of their block, news included and the wise words I have received. Photos of the process scattered about, especially the upcoming printing party. And of course a nice picture of the overall print, albeit small and split into its five parts.
I think that will make a nice coffee-table book and give a glimpse into an awesome collaboration for printmakers and art lovers all over the world.
As I hear the rumors, you can make a blog into a book with Google tools so I will explore that solution as well. There is time for everything.
Posted by Maria Arango Diener at February 22, 2012